THE END OF FLASH

THE END OF FLASH

Ten years ago, designing for the web sometimes felt a little like I would imagine the Wild West, or Berlin just after the wall came down. Maybe I’m exaggerating, but web designers and programmers were experimenting and exploring more, trying out new things, pushing out new frontiers, because there were no rules and expectations established yet and as a result, it was beautifully chaotic.  And very exiting.

But over time words like USABILITY became more and more important. Because people got hooked on the internet and it became part of everyday life. You did not only go onto the web to discover something, but you wanted to look up “everyday” information on the run, like which bus to take to the beach and what time the sports club closes.  54 times a day. So the user wanted the info fast and easy which led to standardized interfaces & established norms, the World Wide Web Consortium pushing for Web standards, readability norms & usability rules.

Back then, you could be much more playful, re-inventing the wheel every time (and everybody was more lenient if things took more time, because nobody knew how long it should take).  Interfaces were still being explored and Flash was the tool to add infinite possibilities of interaction and depth, movement and sound.  Every website was different and weird and exciting. It was exploring hidden worlds.  I loved seeing what people would dream up next, and everyone would wonder how the hell they did it.

Even though I understand the reasons the internet has moved on – Flash was plagued with dirty programming, bugs and crashes in a proprietary closed format, security issues, problems with mobile battery life etc etc, I still think our new technologies are still playing catch up to the level of interaction and animation you could explore with Flash as a designer.

And so Flash, and a certain way of making websites, died.  This also caused another issue for designers called browser compatibility…but don’t get me started.

THE FOLLOWING ARE LINKS TO FLASHSITES. YOU NEED TO VIEW THEM WITH A FLASH ENABLED BROWSER 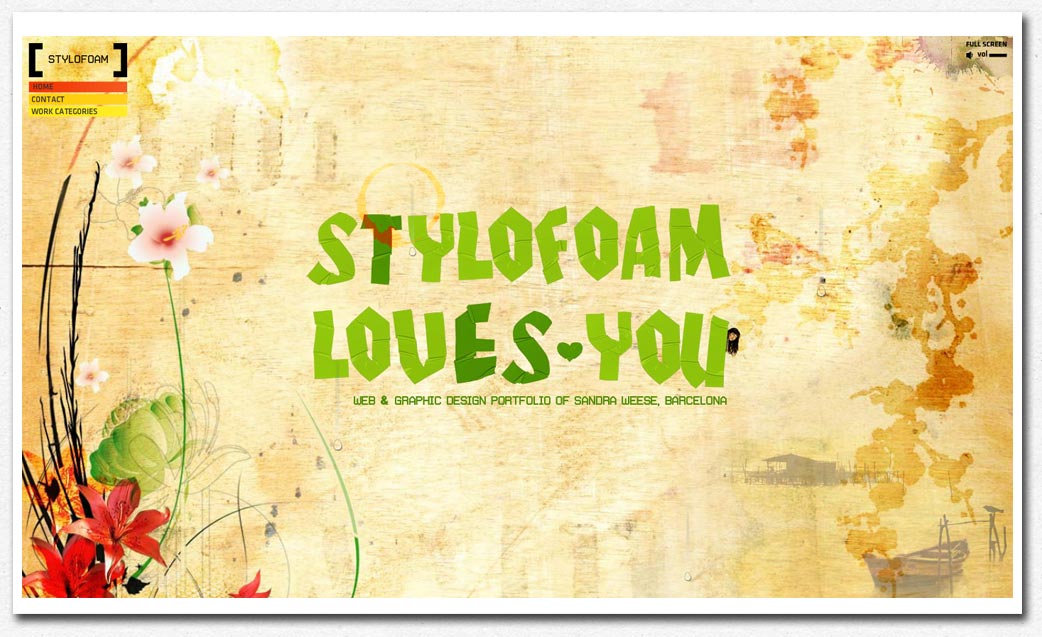 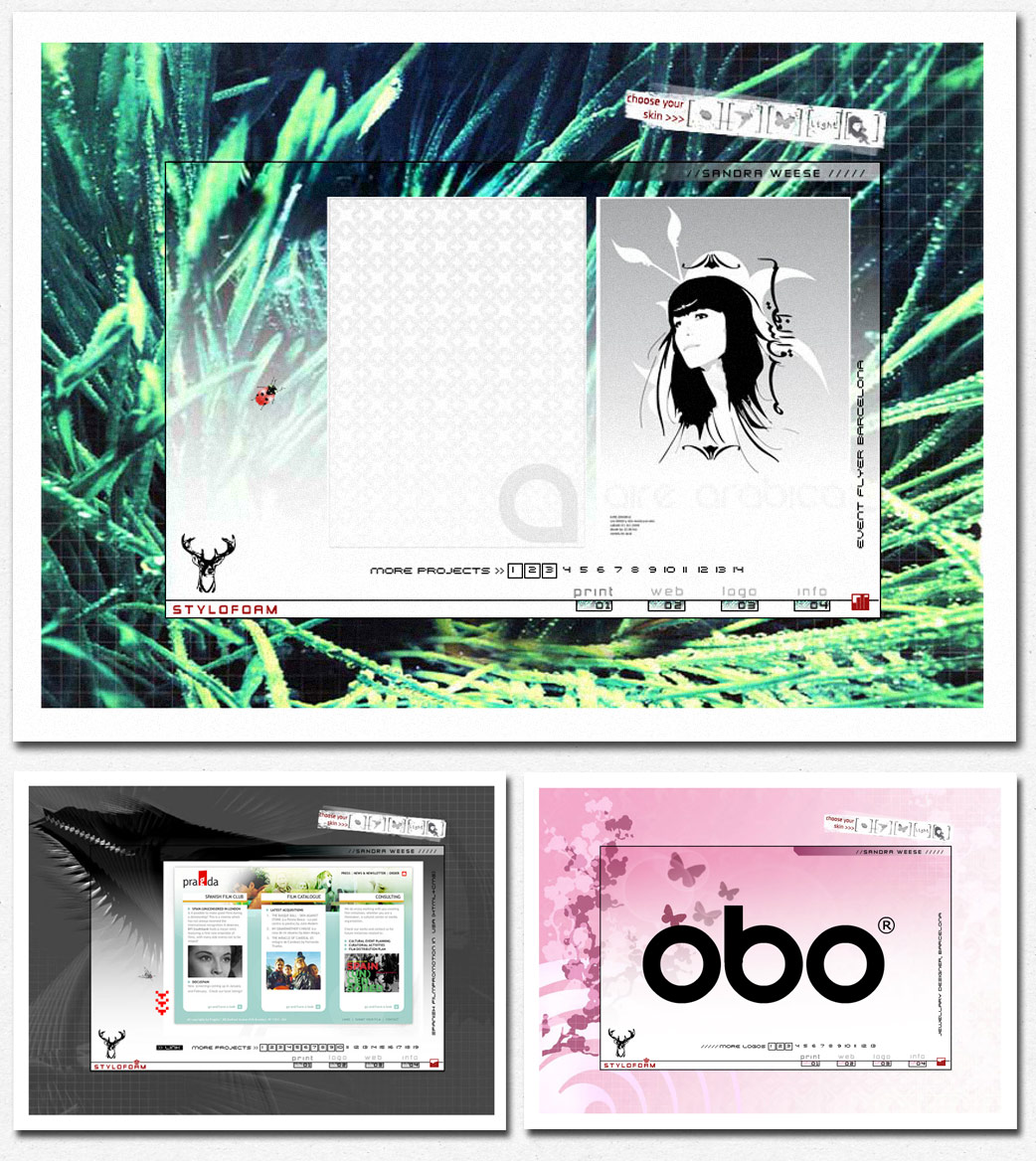 Your own development can be seen best by looking at your own promotional work. Looking at our previous websites, it becomes very apparent that of course we have adapted to the new technologies out there, but the “maximalism” (lots of details) of our own graphic style has remained very similar.  This current site has a lot more room for descriptive texts, each project has a lot more details – an entire section per project where I can playfully set a tone based on the design of the project – a news section, video integration and more, mobile compatability, and so on.  But we still want it to feel like a playful, beautiful space.

We just came back from traveling in South East Asia, which impressed me a lot! I think I added an Asian touch to almost all the graphics I produced for a while and in our own website it became very apparent, not least because I used video footage and images from the actual journey. The background music (remember that?) was designed to be totally ambient.  It is built around the theme-tune of the wonderful Wong Kar Wai film “In The Mood For Love”, integrated into a soundscape as if you are listening to an old record player, on your wooden veranda in the jungle one evening.  You wander over and start to play on the piano…

The site before that, way back in 2004, I had just discovered how to animate in Flash and add loads of interactivity – so I went for it.   I couldn’t decide on one graphical style, so I decided to create “skins” that you could change through secret buttons hidden in insects, complete with playful sound design with hover-over “instruments”, blinking text and tiny buttons ; -)

The whole idea of what a web was about was very different. I wanted people to explore, stumble upon little surprises and discover the various design treats hidden in the site.

Valeria is a cross-culture artist, living between Spain and the Phillipines. Her paintings are all influenced by Asian culture which fitted right into my mood at the time. I created a quite complex page with lots of small details from paint splashes on hover over (that I filmed on our glass table in the studio) to hidden images in the background.

I enjoyed making a “click around and explore” style web, designed to be an experience in itself. It reflected her own artistic style very well: maximal, playful and  with lots of hidden detail just like her paintings. 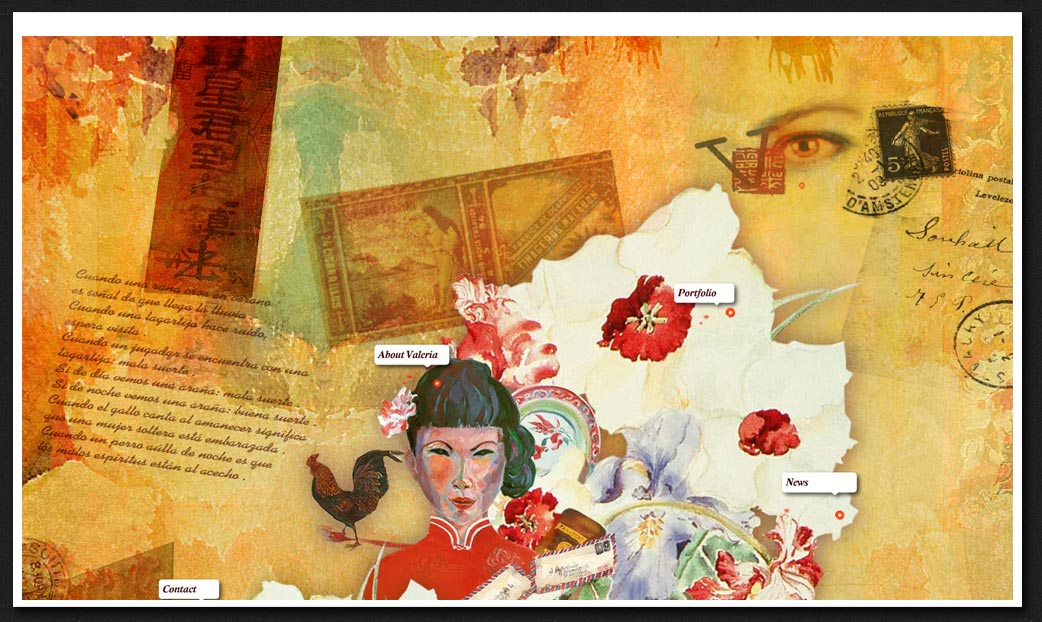 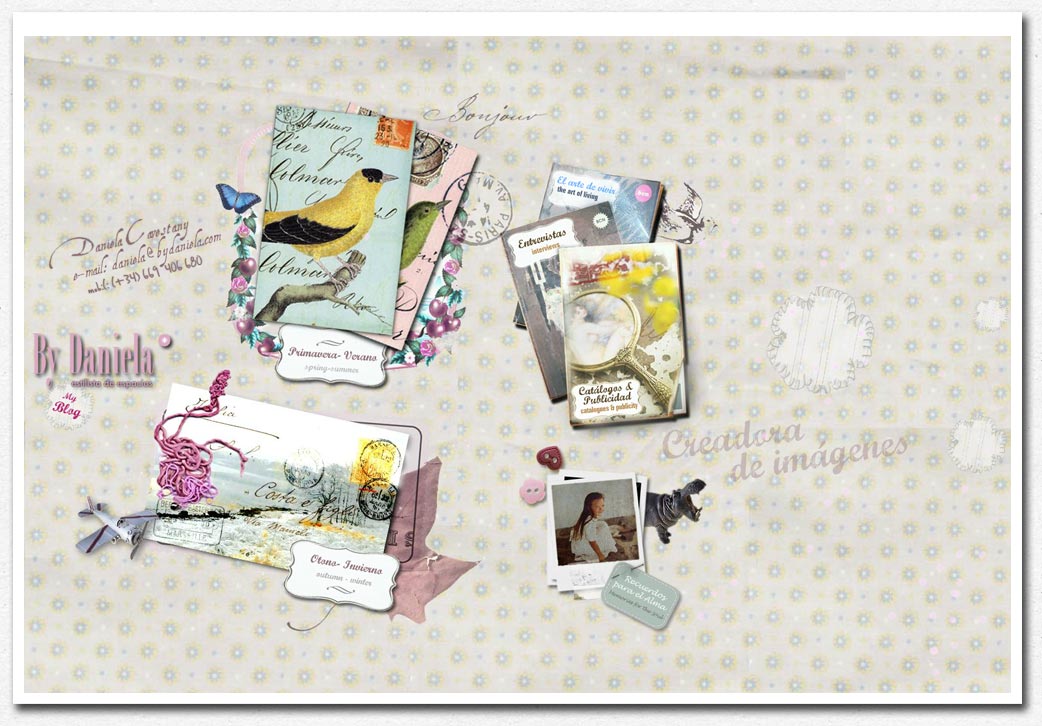 Daniela is an atrezzo stylist. Working closely together with her photographer husband, she prepares the spaces before they get photographed, with exquisite attention to detail. Creating her website with all her professional material made available – from feathers to textiles, postcards or shells, I did not only manage to create a website that reflects her kooky, vintage chic style, but it even influenced my own styling for a while.

As a reflection of how much it suited her, the flash website we created in 2010 is still her current one, but we are now in discussions about an update.

In 2009 4iD collective were three quite tech-savy guys, developing sustainable transportation designs. Therefore, the website I created for them  intended to be  as a mixture between technology and nature. This theme ran through the image choice to the m0vement right to the sound design with it’s electronically twisted natural sounds.

This Flash had an ” almost back-office “. It was created with an easily updatable XML file, and even the project 3D animations were prepared so that the client could create them easily for a new product. 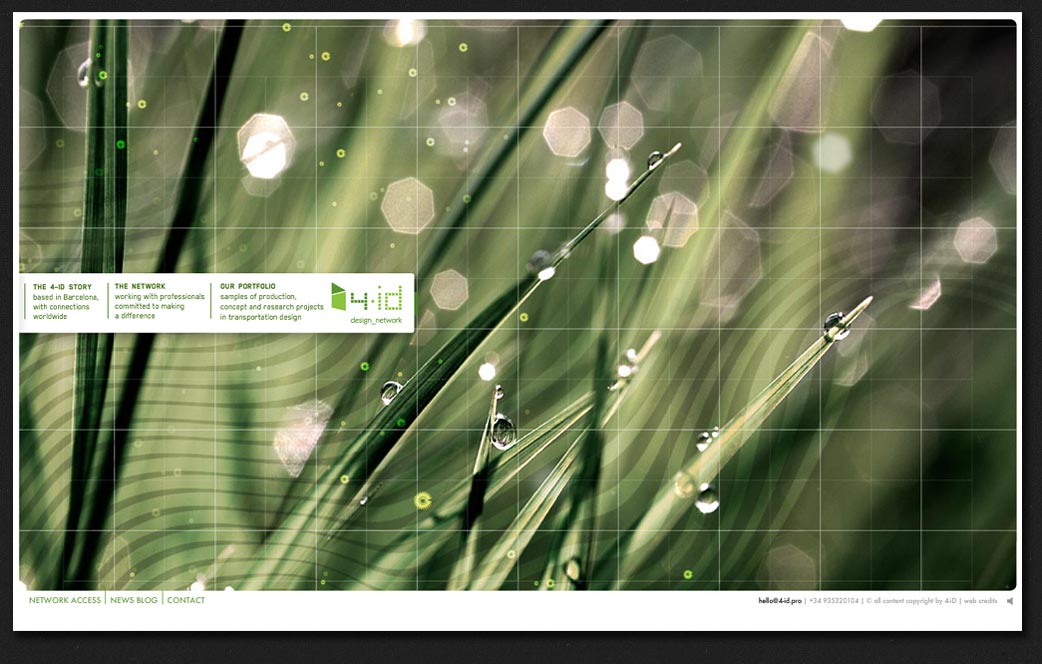 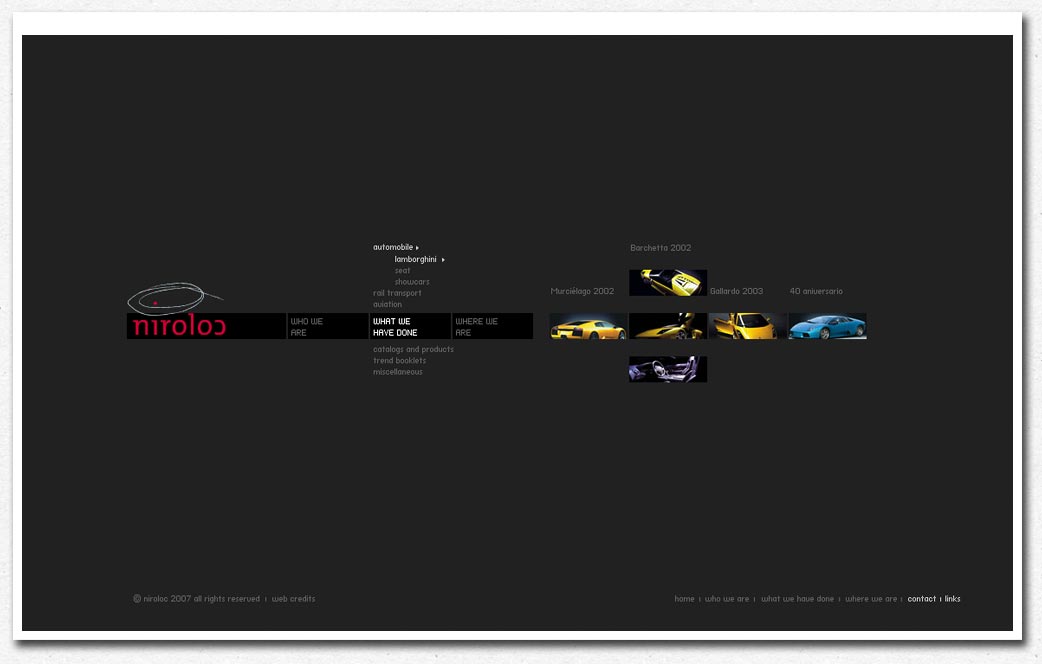 The thinking heads behind Niroloc ( the reverse for Colorin) worked for years in the Design department of SEAT, before they set out to work for themselves. This meant they already had an impressive portfolio to start with, which later on included a few more big names like LAMBORGHINI and RENFE; the Spanish railway. I wanted to create an avant-garde page that is as much ahead of the time as their designs are.

I opted for a central menu opens or hides to the left on mouse-click with “Fullscreen” images (meaning fullscreen for the small screens at the time, and not responsive) which was quite unusual for the time.

This was one of my earliest Flash sites. But Flash was just a part of it.  Sergio Vidal asked me to help with creating his jewellery brand, from finding the name to photography to web and stationary. I was involved right from the beginning, which was very exiting and gave me a taste for this kind of whole brand creation work. 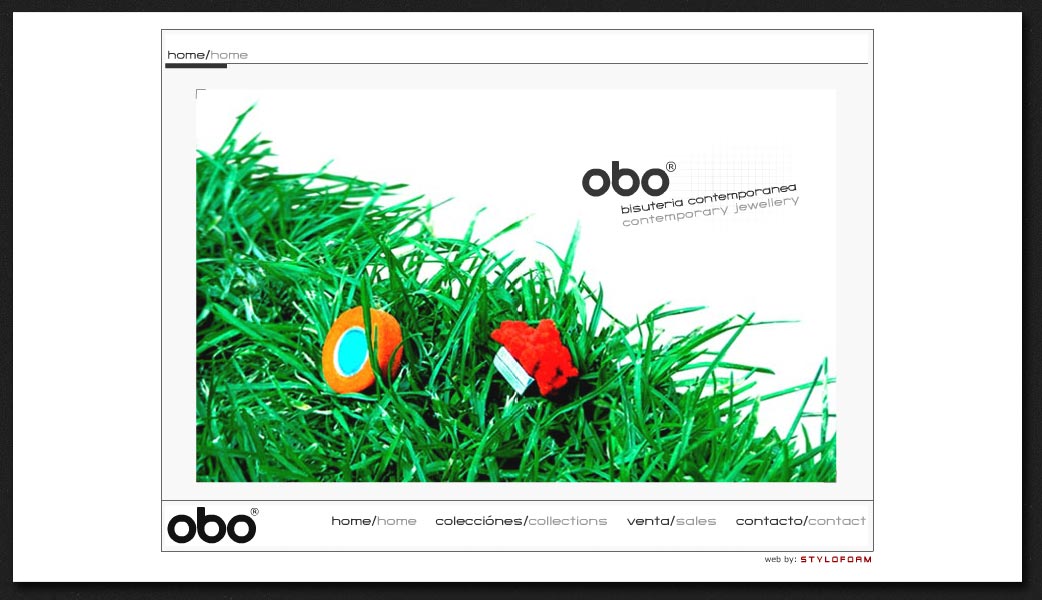 LILLIANA CABAL – ACTRESS
– logo, identity & web design –
LAZARUS TAXON – SHORT FILM
– webdesign –
We use cookies for the Newsletter sign-up, our Contact form as well as Google Analitics and Paypal for the online- shop. If you continue to use this site we will assume that you are happy with it.OkRead more